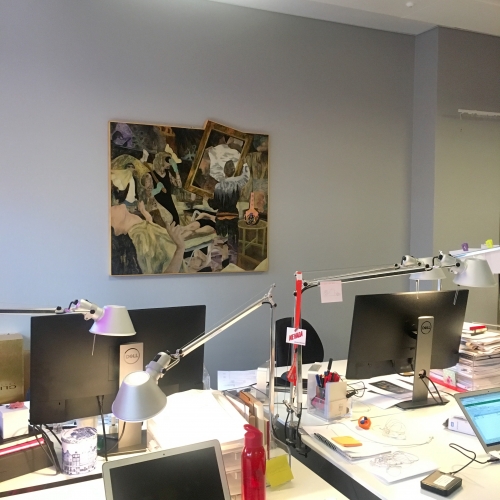 “A momentary distraction is definitely not a bad thing in the workplace. Art has historically always been about escape, and we all need is an escape sometimes.”

Contrary to what your boss might say, being distracted at work is not always a bad thing. If the object of your distraction is a work of art, it can actually boost productivity, lower stress and increase wellbeing. This is according to Dr Craig Knight, who has studied the psychology of working environments for 12 years at the University of Exeter, where he heads a research group called Identity Realisation (IDR).

“There is a real tendency to opt for sanitised, lean workspaces, designed to encourage staff to just get on with their work and avoid distraction,” he explains. But there isn’t a branch of science in the world which believes this approach boosts productivity or makes for happier workers, according to Knight. “If you enrich a space people feel much happier and work better; a very good way of doing this is by using art.”

Knight and his team have conducted studies into the most effective work environments by asking participants to do an hour’s work in four different types of office space:

“In 12 years we have never found that lean offices create better results; and the more involved people are in the enrichment process, the more they are able to realise a part of themselves in the space,” explains Knight. He is emphatic that by art he doesn’t mean so-called “motivational posters”, which say things like “there is no I in team” or “whatever the problem, be part of the solution”, because these don’t work at all.

Read the entire article from the Guardian here