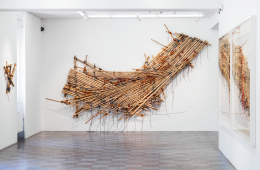 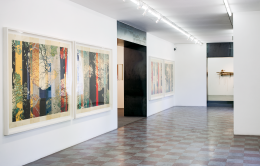 Wetterling Gallery is proud to present the celebrated American artists Mike + Doug Starn with an exhibition featuring their recently developed series No Mind Not Thinks No Things Juju. The Starn brothers are known for pushing the borders of photography in contemporary art and have for the past 25 years been challenging the medium and experimenting with numerous ways of presentation.

Mike + Doug Starn have received major acclaim for their project Big Bambú over the last years, an enormous and ever-changing installation built of only bamboo poles and climbing rope. It has until this day been carried out at several places: The exhibition at the Metropolitan Museum’s roof top in 2010 attracted more than 600.000 visitors and has after its enormous success travelled to the Venice Biennial in 2011. In 2012, it was put up as a permanent installation at the MACRO Museo Testaccio in Rome, Italy.

In the exhibition in Stockholm, Wetterling Gallery presents 13 photography-based wall pieces that relate to a recurring theme in their oeuvre, trees. Mike + Doug Starn are often inspired by natural phenomenon and imaginary, and are searching for artistical metaphors for structures and interrelations in the world. In their new pieces that are printed on transparent Kozo paper, black intersecting branches and overlapping paper stripes create an abstract structure in which the viewer gets lost. Cross-references to several subjects open up immediately; to mind come calligraphy, other organic structures in nature, structures in both micro- and macrocosm, in the human mind and thinking, in social contexts, and not at least the chaotic configurations in Big Bambú.

Moreover, the exhibition features four fragments from Big Bambú in different sizes that give a tactile sensation of the organic sculpture and its construction. Mike + Doug Starn save fragments from all Big Bambú’s “incarnations” to re-insert them as “steam cells” in new installations, and to create independent sculptures that bear Big Bambú’s “DNA”. 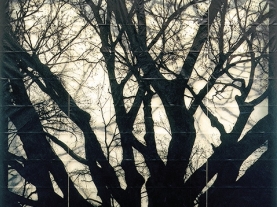